It's race day with Leslie Scott

There's no way to resist this fast-moving book, now on sale for .99
The sale ends on March 1st so you'd better race to buy it.

The Finish Line
By Leslie Scott 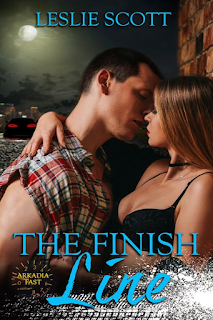 Blurb:
Another night at the races is more than burnt rubber with a hit of nitrous. For one young woman, it's navigating trauma, love, and loss in the stifling Texas heat under the watchful gaze of her brother’s best friend and reigning King of the Streets, Jordan Slater. Home in Arkadia again, Raelynn Casey starts to heal from a terrible incident at college. She finds love in Jordan, a member of her brother’s circle of racing buddies. When another in the racing circle, the guy who took her to her high school prom, exposes his feelings for Raelynn, tragedy erupts like a tank of race fuel. Guilt, remorse, and pain must be overcome before Raelynn and Jordan can race to The Finish Line.

Excerpt:
On a desolate country road, under the cover of night, Jordan’s Malibu roared to life. The front tire lifted from the road for the briefest second, the power the engine put down almost too much to hold to the ground. When another driver would have lifted from the gas, Jordan held it and tore off down the concrete hell bent for leather.
It was a fast pass, fast enough to have my brother jumping up and punching the air with a hoot. I didn’t have time to celebrate, instead, I jogged out to perform the same function for Devin’s rear tires.
Devin’s car stuck and didn’t lift. His pass might have even been quicker than Jordan’s since he didn’t pop a wheelie.
Riding high from the rush of it, I made quick work of stowing the ramps on the trailer so we could pick Jordan up. At the end of the road, his idling taillights were a beacon. Behind us, Breanna and Vic mirrored our actions with the other rig.
There was no safety net out here, no cops or security paid off to turn a blind eye like on race nights. Odds were someone had heard us, someone who could have called the cops. We had to get out as quickly as we could. If we were here when the cops showed up, the race cars could be impounded and we could end up in jail.
“She hit hard, son!” Aiden’s shout carried across the fields around us as Jordan pulled onto the trailer.
“Too hard, maybe?” I mused as he climbed out of the car.
“Nah, I had it.”
I couldn’t argue that point. Jordan had it, he was always in control.
With a surprising amount of grace, Jordan hopped off the trailer. I moved into his outstretched arms like I had a hundred times before.
For a split-second as he caught me, I was pressed against his chest. The magnetic appeal I couldn’t get away from pulled me back in time. It was a place I didn’t want to remember. I’d barreled headlong into disaster as a direct result of what happened that night. I couldn’t afford to go back.
My body’s response, the quickening of my pulse and the warming at my core, were enough to send me over the edge all on their own. The extra push I hadn’t needed was the flash of barely controlled desire in Jordan’s eyes. He had a good game face, but I could see past it.
His body trembled against mine as he let me slide down the length of him to the concrete. If I held on a little too long to his chest and wished for more, if I wished we were alone with no one else was watching, I was going to keep it to myself.
Every intention was to walk away. Yet as I started to slide from his grasp, his head tilted and his lips parted and threatened to kiss me.
I wished he would, with all my being I wished he would. I inched up onto my tip-toes. I was so close I could feel his breath against my lips. And still, he watched me. I could read the want in his eyes, feel it in the rapid beat of his heart where I pressed myself against his chest.
The roar of an engine reminded me of where we were and what had passed between us. I was startled as I pulled away. The warm summer air fortified me against the urge to wrap my arms around myself.
He hadn’t kissed me and still I was exposed, naked even. Betrayal and fear jockeyed for position in the race to the surface of my being. Betrayal to myself, to the boundaries and walls I’d built to protect myself.

The second story is just as hot and coming your way on March 6th.
Pre-order now! 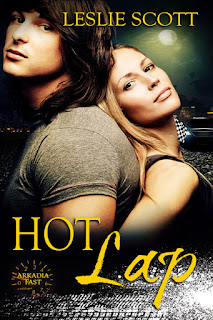 Blurb:
Starting a new life isn't easy when the skeletons locked in her closet are the notorious town drunk for a father and a haunted past. But, Hadley Morgan isn't one to shy away from second chances or giving them either.

When a young, single father wrapped up in an octane fueled package takes particular interest in her, she begins to dream. But well-known drag racer Aiden Casey is also her boss, making her hesitate to grab at her chance at happiness.

Will her secrets shatter their chance at love or will his past come back to destroy both of them?

Before we cross the finish line lets learn more about author Leslie Scott. 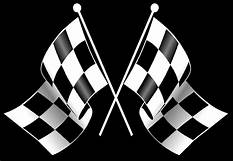 Author Bio:
Leslie spends most days attempting to wrangle the voices in her head and often wishes she could clone herself so that their stories get told faster. She loves words, romance, and characters that feel like family and spends almost all of her free time with her own family; including a boisterous eleven year old that she homeschools and an assorted cast of rescue pets. She lives her own happily ever after with her soul mate and best friend in the northern part of Alabama and hopes you enjoy reading her stories as much as she enjoys writing them.