Today I'm welcoming Karilyn Bentley with her newest novel for her Demon Huntress Series. You'll want this one and all of them. This is what I'm talking about~

Blurb:
Gin Crawford, the world's latest demon huntress, has no time to mourn her dead lover as she's called in to determine why a demon attack occurred at the local medical school. And not just any demon, but the one demon that gives her demon-killing bracelet the shivers. A dead professor, a lab full of missing anthrax, and a demon who turns good people into minions complicate her life. Can Gin and her mentor Aidan Smythe solve the mystery of the missing anthrax and the identity of the demon before someone else dies? 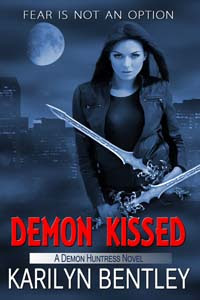 Excerpt:
The scent of sulfur hangs in the air like a demonic stink bomb. I want to slap a hand over my nose, but no one else seems affected by the stench. Must be a demon huntress thing.
“Justitian,” Smythe mutters. “Not demon huntress.”
“If you don’t like my new title, then stay out of my mind.”
He glares. I swallow. Cross my arms. Refuse to take a step back. I’m learning not to be intimidated by his anger. Go me.
My justitia vibrates, throwing me out of my internal battle, pulling me back to the land of death and minions. The blob of colors pulsates, a glowing reminder of a moment of terror. The moment the demon appeared to the grad student.
Granted, I’m still taking Demons 101, but I thought demons formed minions in private.  Usually after the human committed a crime, not before. A tryout, so to speak. And maybe that happened, but it sure seems to me like the black blob of demon force appeared to the grad student smack in the middle of the hallway.
Or maybe that always happens, and I just now noticed it.
The justitia’s vibration grows stronger, trembling my arm, my veins. Not its normal excited tremor upon seeing a minion or demon. A rush of images spikes through my mind, scenes of terror coupled with blood and death, memories of the justitia’s former wearers captured in time by the entity in the bracelet.
I’m not the only one freaked out by the colored blob. How bad was this demon to scare a justitia?

Karilyn's Bio
Karilyn Bentley's love of reading stories and preference of sitting in front of a computer at home instead of in a cube, drove her to pen her own works, blending fantasy and romance mixed with a touch of funny.

Her paranormal romance novella, Werewolves in London, placed in the Got Wolf contest and started her writing career as an author of sexy heroes and lush fantasy worlds.

Karilyn lives in North Texas with her own hunky hero, a crazy dog nicknamed The Kraken, and a handful of colorful saltwater fish.