Today our guest of honor is Joyce Holmes, sister author at the Wild Rose Press. She’s come to tell us about her new release, VISUAL EFFECTS, a contemporary romance.

~Will their emotional firestorm leave nothing but ashes or can love emerge victorious?~ 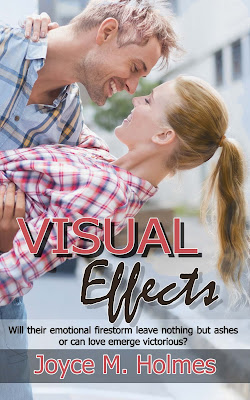 Drey Winston is a fierce competitor who enjoys challenging her mind and body. But when it comes to her heart—no one ever gets close enough to compete for it. Having grown up believing she was an unwanted burden to her parents, she prefers to keep her feelings well hidden. Just when her hard-fought goals are finally within reach, the audacious Jesse Devlin comes along to breach her carefully guarded defenses.

After a disastrous marriage early in life, Jesse Devlin prefers strings-free relationships. Confident and outgoing, he gets along well with women, but his natural charm can’t seem to penetrate Drey Winston’s aloofness. While attempting to win her over, he’s the one who ends up losing his heart.

Can this commitment-phobic bachelor convince the stubbornly independent woman he loves that his feelings—and hers—are the real deal?

Welcome to the beach, Joyce.

Hi everyone. Thanks for having me, Sandra.

Let me tell you what first caught my attention about your new book: The title, VISUAL EFFECTS, and hearing you have a passion for photography. Is there a connection? What made you decide on that title?

There isn’t a connection to my passion for photography, but there is a connection to passion. Visual Effects is another name for the computer-generated effects in movies, which is what both of my characters do for a living. They were ‘visually’ attracted to each other long before they admitted to liking each other, so as a play on the words, their ‘visual effects’ started everything rolling.

The models on your cover are beautiful. Your hero, Jesse, is especially handsome. Can you give us a mini bio on him? His occupation, interests, family situation, etc…

Jesse is a big, good-looking man, who’s a talented CG animator. He’s also very talented with the ladies, which doesn’t impress his new co-worker, Drey. Although Jesse might come off as a happy-go-lucky charmer, he carries some emotional scars. He’d just rather keep them hidden, even from himself. He’s loyal to a fault and is a huge support to his sister and her two boys.

Drey looks like the girl-next-door type. What can you tell us about her?

Drey is a jock, who thrives on challenges. She runs marathons, plays basketball, rides a horse. She’s also fiercely independent and just a touch stubborn—although she prefers the word tenacious. She was raised by doting grandparents, who told her she could achieve anything she set her mind to and never to give up on her dreams. At seventeen, she left the family ranch behind to pursue those dreams, which eventually led her to her new job—and Jesse Devlin.

Describe the setting for us. Does it take place in your area of or elsewhere?

This is actually the only book I’ve written that isn’t set in . The story takes place in LA, where both of my characters work in the film industry. There are also some scenes in , the state of my birth.

This excerpt gives us a glimpse of the chemistry between Jesse and Drey:

Jesse leaned against a tree to draw in a few deep breaths. As he straightened, he plucked his ball cap off his head and wiped his forearm across his brow, then hooted a victory cheer. “Hard work’s over. Time for the reward.”
He dropped the cap onto the sand and emptied his pockets into it. Then he pulled his T-shirt over muscled shoulders, dropped it onto the sand on top of his cap, and made quick work of his footwear. Drey stared in disbelief as he beelined down the beach and ran straight into the low surf. When he was hip-deep in the water, he slipped smoothly beneath the surface. He reappeared several feet out and turned to wave.
“Join me,” he called. “The water’s great.”
“Not a chance. The ocean is cold in summer, I can only imagine how frigid it must be today.”
“Wuss,” he scoffed and splashed water in her direction.
Shivers that had nothing to do with feeling chilly shot through Drey as she watched him emerge from the water a few minutes later. Rivulets ran down his chest, following the ridges and planes of his brawny body. Wet shorts clung to muscular thighs.
He ran his hands over his face and then shook himself like a playful pup. “You don’t know what you missed. Nothing like a dip in the salt chuck to get the heart pumping. Well, almost nothing.” He stalked deliberately up the beach toward her, and the look on his face made her back away, but she didn’t react fast enough. He caught her up in his arms, laughing at her shrieks of protest.
“Lemme go, Jesse. You’re cold. Come on, Jesse, lemme go. You’re getting me all wet.”
“That’s the whole idea. Get you wet and me warm.”
She gave him a firm push in the wrong direction as she sprinted down the beach. “Not if you can’t catch me,” she threw over her shoulder as she went.

Now we want to know more about you.

Author Bio:
Joyce Holmes lives with her husband and very small dog in the beautiful Okanagan region of . The award-winning author is happily living her dream of being a stay-at-home writer. Photography and blogging about her travels are two of her passions, along with visiting her kids and grandkids. When she's not dreaming up stories in her head or planning her next great adventure, she’s off enjoying the great outdoors.

Good luck with VISUAL EFFECTS, Joyce, and thanks for visiting my beach. Maybe I’ll get up to your area one day.

It was lovely being here with you, Sandra. We have some great beaches out this way, too. You really should come for a visit.

*A question for our visitors*
When you and your partner, (or ex), first met, which of you had the most emotional baggage and how long did it take before you had a ring on your finger?

Joyce's answer: My hubby and I will soon celebrate our 38th wedding anniversary. We were mere babies when we met, at eighteen and nineteen. Neither of us were experienced enough to have much baggage, but I had just come off an emotional breakup and certainly wasn’t looking for a new relationship. He was all about enjoying life and spreading his wings, so to speak. We instantly became fast friends, and that friendship gradually developed into something more serious. We married just shy of two years after first meeting.

My answer: My husband and I had both come out of BAD divorces, massive baggage on both sides, when we met 36 years ago. We both had two toddlers to raise alone. We entered into a temporary marriage of convenience. You might say it stuck.