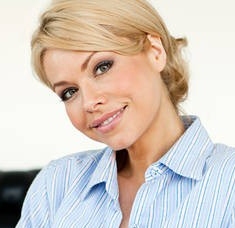 Sandy - Hi Ginny, thanks for inviting me for coffee.
Ginny - Thanks for being brave enough to accept. Coffee is about the only thing I've learned to make so far, but I’m trying. You’ll be glad to know that the donuts are store bought. Brett says I’m domestically challenged, but the truth is, I’m just a disaster in the kitchen.

Sandy - From what I’ve heard, the kitchen isn’t the only place where disaster has struck.
Ginny - That’s true. I do have a tendency get into trouble.

Sandy - I guess that can be a problem when you’re married to the county sheriff.
Ginny - It certainly can. I’m surprised that Brett didn’t ship me back to Michigan after my first week here. He does have a bit of a temper, you know.

Sandy - Ginny, will you tell our guests a little about how you and Brett got together?
Ginny - Well, it all started when I was still living in Michigan. I’d just finished college and was eager to start a career in teaching. The economy had bottomed out and jobs were impossible to find. I had to resort to a nationwide internet campaign. The position here in Three Trees, Georgia, was the only serious offer I got before I was nearly homeless and destitute.

Sandy - That must have been scary.
Ginny - Not as scary as Brett’s emails, but desperate times call for desperate measures.

Sandy - Is it true that you didn’t even see a picture of Brett, before you drove all the way down here to marry him?
Ginny- It’s true. I don’t know what I was thinking. The first time I did get a look at him, he was scarier than his emails indicated. Now, though, I can’t take my eyes off him.

Sandy - Can you share a little excerpt of that first meeting, for our guests?
Ginny - Sure…
When Nora opened the door to leave the room, Ginny could see her four rescuers plus a newcomer. Her heart nearly stopped at the sight of the stranger.
The man stood with his back to Ginny glaring down at the deputies and EMTs. He was also dressed in a green uniform. He was at least 6’4”, which seemed huge to a 5’4” woman. His wide shoulders and broad back were dissected by a long black braid that nearly touched his narrow waist. Fists at the ends of dark muscular arms rested on a thick black gun belt. It held a real gun, a big one. His deep, rumbling voice sent vibrations through every nerve in her body.
“I have a mind to sandpaper your heads bald,” the stranger said sternly. “Just tell me which one of you yahoos called your woman while you were responding to an emergency call?”
Carl must have been the bravest of the four men because he was the one who answered. “The only person we talked to all night was Pam.”
“Pam, I should have known,” the man growled, when he heard his dispatcher’s name. “Pamela Armstrong, aka the mouth of the south, has the phone lines buzzing all over town. I don’t want any of you talking about other people’s business. Understood? You know how I feel about gossip.”
Ginny made a choking sound. She was already the subject of gossip? It was after midnight and she hadn’t seen anyone who wasn’t still waiting outside her door.
The man stopped his tirade when he heard the sound behind him. He swung around and faced her with a scowl. His skin was smooth and dark over high cheekbones, a strong jawline, and a long thin nose. He was, without a doubt, the most beautiful, yet masculine, man she’d ever seen. He nearly scared the life right out of her.
His cat-like amber eyes widened with astonishment as they scanned her appearance. He bowed his head and gave it a slow shake. On his chest was a sheriff’s badge over one breast pocket and a nameplate that read Silverfeather over the other. This man was her future husband.
Ginny slammed the door. Holy smoke he was huge, handsome, and had the personality of Attila the Hun.

Sandy - Wow, I see what you mean about his temper. I also see why you can’t take your eyes off him. I’m looking forward to interviewing him in a couple of days.
Ginny - Good luck with that. Brett is a true workaholic. Speaking of work, I have to get to the school for a meeting this morning. I’m sorry to rush you out.

Sandy - That’s okay, I have all I need. I look forward to our guests getting the whole story on August 1st, when ‘The Chief’s Proposal’ is released by The Wild Rose Press.