Night of the Owl (The Novels of Ravenwood, Book Four) By Judith Sterling

It's my pleasure to welcome Judith Sterling to the blog today. I can't wait to read her new release. I hope you'll feel the same. Be sure to read this post to the end to see how Judith's own love plays a part. 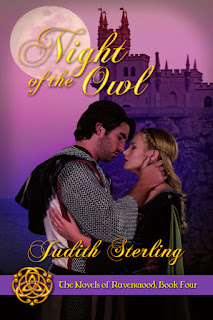 Blurb:
PhD student Ardyth Nightshade has renounced men and pursues her twentieth-century career with single-minded focus. When fate whisks her to medieval England, she meets her match in a man whose passions mirror her own. Can she sacrifice ambition for a love she never sought?
Hugh, Lord Seacrest confounds all who know him. He refuses to marry without a meeting of minds and hearts, and no lady has even approached his ideal…until Ardyth. But she's an odd one, with unique skills, shocking habits, and total conviction she needs no man. She also harbors secrets, and in the midst of rumors, plots, and murder, trust is fragile.
A woman outside of her time. A man ahead of his. They must take a leap of faith to forge a bond that will shape history.

Excerpt:
Ardyth looked from one tunnel entrance to the next, and then the next.  The ledge in front of them was substantial.  It ran along the rock wall to the right, all the way to the mouth of the cave, winding around it to continue along the outer cliff.
Again, she pointed.  “Where does that lead?”
“Shouldn’t you be doffing your clothes?”
Her eyes narrowed.  “In other words, you don’t intend to answer my question.”
He grinned.  “Clever, aren’t you?”
She returned his smile.  “I like to think so.”
“If you’re stalling because you cannot swim—”
“Oh, I can swim.”  She could hardly wait to feel the cool water on her skin.
He folded his arms, and his intense, gray eyes held a dare.  “Then show me.”
“Hold this.”  She handed him the folded smock.  Get ready to eat crow, buddy!  Quickly, she removed her boots, hose, and tunics.  When only her thin, white chemise remained, she stole a peek at her skeptical host.  He stared at her bare feet.
She sighed.  “I know.  My feet are hardly attractive.  In fact, I’ve always thought my toes resemble…”
He raised his eyebrows.  “What?”
Astronauts.  But I can’t tell you that.  “Nothing.”
His eyebrows settled again, but the orbs beneath them seemed to glow with a new light.  “I beg to differ with your opinion.  Your feet are quite…lovely.”
She almost laughed, until heat flooded her cheeks.  I’m blushing?  “Thank you,” she muttered.  With an inward groan, she started toward the water.  For crying out loud!  He only complimented your feet.  Your pale, crazy, NASA-evoking feet.  Get a grip!
The ocean breeze caught the hem of her smock as she stepped into the surf.  Foamy water—colder than she would’ve liked—enveloped her feet.  Thank God for the heat of the sun!  But this was the closest she’d come to a bath in days, and she was determined to prove her skills to the man who underestimated her at every turn.  She waded forward, and the brisk, undulating water swallowed her calves, knees, thighs, and hips.
“Lady Ardyth!”
She turned.  Her dry smock in his hands, Hugh stood with feet well apart on the wet sand.
“You needn’t prove your courage further!” he called above the lapping, swishing voice of the sea.  “Come back before—”
“Courage isn’t the point!  Swimming is!”  The level of the surrounding water lowered to her thighs, signaling a coming wave.
She turned just as it crested and dove headfirst into it.  Completely submerged in the chill, rushing water, she headed left and allowed herself to rise to the surface.  She swam freestyle for several strokes, then flipped onto her back and floated with abandon.  After a minute or two, she flipped over, and swam in the opposite direction.  Then she stood with the water at her ribs, waited for the next wave, and indulged in bodysurfing, which carried her with a whoosh back toward shore.
Satisfied, she straightened, knee-deep in the water.  Her wet chemise clung to her frame, and she knew Lord Seacrest was getting a lordly eyeful.  Her nipples were rock-hard from the cold.
She rolled her eyes toward the bright, blue sky.  My kingdom for a bra!  And throw in a pair of underwear, too!  But both articles of clothing were back at Nihtscua and not likely to appear anytime soon.  For the first time since plunging into the surf, she regarded Hugh.
Eyes wide, her dry smock clutched in his hands, he stood as if frozen.  Only his gaze moved, traveling from her breasts to the apex of her thighs.
She pulled the smock away from her flesh as best she could and advanced toward him, stopping an arm’s length away.  “I told you I could swim.”
He blinked.  Then his full, sensual lips curled into a smile.  “Indeed, you did.”
“And?”
“And what?”
“You’ve doubted me twice already.  Perhaps you owe me an apology.”
His eyes widened, then relaxed.  “Perhaps I do.  Pray…forgive me.”
The words couldn’t have come easily, and the fact he’d said them made her grin.  “I forgive you.  This time.  But I ask respectfully that you not underestimate me again.”
For two seconds, he hesitated.  “ʼTis a reasonable request, and I shall endeavor to honor it.”  He gave her a quizzical look.  Then he shook his head and chuckled.  “Is there anything you cannot do?”
She thought for a moment.  “I’ve never ridden aside.  If I’m going to ride something, I spread my legs.”  The instant the words left her mouth, she cringed inside.  Good God.  That came out all wrong!
Humor curved his lips, but his eyes smoldered.  Did his thoughts mirror hers?  He took a step closer, and his masculine aura invaded her personal space.  “Tell me more.” 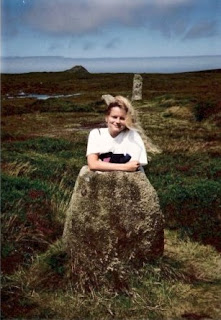 Author Bio
Judith Sterling is an award-winning author whose love of history and passion for the paranormal infuse everything she writes. Whether penning medieval romance (The Novels of Ravenwood) or young adult paranormal fantasy (the Guardians of Erin series), her favorite themes include true love, destiny, time travel, healing, redemption, and finding the hidden magic which exists all around us. She loves to share that magic with readers and whisk them far away from their troubles, particularly to locations in the British Isles.
Her nonfiction books, written under Judith Marshall, have been translated into multiple languages. She has an MA in linguistics and a BA in history, with a minor in British Studies. Born in that sauna called Florida, she craved cooler climes, and once the travel bug bit, she lived in England, Scotland, Sweden, Wisconsin, Virginia, and on the island of Nantucket. She currently lives in Salem, Massachusetts with her husband and their identical twin sons.

A little extra…
The hero and heroine’s mutual love of history reflects my husband’s and mine.  You might say history brought us together because right around the same time, each of us decided independently to move from different parts of the country to Virginia, specifically to seek work at Colonial Williamsburg.  Nowadays, we work (respectively) at The House of the Seven Gables and The Witch House in Salem, MA.  There’s a lot of both of us in Night of the Owl.  That’s why the release date (Oct. 21, 2019) is perfect; it’s our 19th wedding anniversary.  As if that isn't enough, I wore my hair almost exactly like the cover model's on the big day.  Neither my publisher nor the cover artist knew about either coincidence.  Pretty cool, right?!

That is incredibly cool! Leave any comments or questions below while I look up the other Ravenwood books. I think I may have a new obsession.