It's my pleasure to introduce you to a soon-to-be-published author for The Wild Rose Press. Welcome, Alexandra Christle. You can already find a few of her works on Amazon. I'll show you one in a minute. But first, let's find out a little about our new sister rose. Alexandra has not traveled to 47 countries, worked in law enforcement for 25 years where she single-handedly apprehended ten of the world's most wanted, or practiced law or psychiatry.
She doesn't speak 5 languages fluently, rival Beethoven on the piano, or send her rescue dogs to save flood victims. In fact, currently, she is pet-less.

She does, however, do a heck of a lot of research.

She has jumped from an airplane, spent the day on a commercial shrimp boat, spent a weekend with a houseful of Navy SEALs, and hitchhiked across 3 states. She has worked for newspapers, taught high school English, and had a lengthy stint as a graphic designer. Raised a son and daughter, scored 3 grandchildren; and, written a few books along the way.

The human condition and people fascinate her, and especially men. They are, in her words, pretty cool creatures.

1-      What genres do you write and do you also prefer those genres for reading? I write primarily thrillers and romances – but my personal favorite reads are thrillers. I’ve surprised myself lately, though – I’ve had to read several paranormals for my work, and they’ve been exceptional.

2-      Tell us about your writing style. Do you plot and plan first, or sit at your desk and let it fly? I usually see, hear, or read something that triggers an idea, and I’ll get a general plot, or at least where I want the story to end up. Then things just come to me. And a LOT of editing.

3-      What is most inspiring to you; a setting, a plot idea, or an interesting character and why? I’ve written stories because I overheard someone make a comment, read a beautiful passage in a book, or found some little tidbit in the news. I’ve lived in places that begged for a story to be told about them. Inspiration is everywhere if you keep your mind open.

4-      Describe to us your perfect writing experience; time, place, background, etc.… I wrote four novels sitting in a nook in a long hallway, with two children running up and down the hall. But that’s not my first choice. The beach is my ideal spot. I could sit all day and listen to the waves. At home, I always have some classical music in the background. (Yup. I’m one of those.)

Now, to give you a sample of Alexandra's work~ 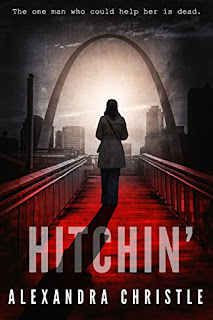 Tag Line: The one man who could help her is dead.


Headstrong and impulsive, reporter Cassie Phillips hitchhikes across Missouri to get a prize-winning story. Instead, she’s attacked and ends up abandoned and lost in East St. Louis…until drug dealer Tony Scarlotti finds her and takes her home.

The inconsistencies in the man haunt her, and as their paths continue to cross, she questions who he really is. But when he’s jailed for murdering a police officer and then works his way into the Mafia, she gives up trying to believe in him.

Her questions are finally answered just before he’s killed by a rival family in a shoot-out under the Gateway Arch. Now she’s running for her life with no one to help her.

And here is a further example of her voice~

He gave her a thorough once—or twice—over. Her attitude, her speech—maybe he’d been wrong about her age. “You seen yourself, chica? You look like a damn strung-out addict. The only help you gonna get from the cops is a rap sheet.”
She deflated. Some. Damned spitfire, this little redhead.
“What you doin’ here, anyway? This ain’t your ’hood.”
“I told you. I had a fight with—”
“Yeah, yeah. The hombre who dumped you in the middle of East St. Louis.” He watched her. “That the guy with the Rolls?”
She blanched and swallowed then curled her lips in.
Hit on something there. He took her by the elbow and propelled her forward. “Let’s go.” She struggled against him, but he led her out of the alley and around the block to a beat-up Impala that boasted more rust than paint. “Get in.” He opened the door.
She held back. “I’m not getting in a car with you. Do you think I’m crazy?”
Anger welled in him, and he muttered a string of expletives in Spanish. Sexy or not, this little hothead had pushed his last button. He gritted his teeth. “Get in the goddamn car before I tie you up and stuff an oily rag down your throat.”
She peered through the car’s back window at the piles of junk in the back seat.
“Yeah. I’m not joking.” He waited, arms crossed.
Some of her superior attitude faded as she slumped. Her chest rose with a ragged deep breath, and she slid into the front seat.