Spotlight on Nothing To Lose by Darlene Fredette

Introducing something short and sweet 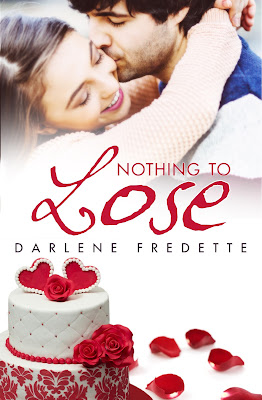 She has one last hope – a small, family-run bakery that might just be baking up second chances.

Dwindling finances has Jesse Robinson running out of options. With a past filled with failures, she longs for a new beginning. Applying for a job she isn’t qualified for may be another crazy mistake, but at this point Jesse has nothing to lose.

Juggling two jobs, Travis Cooper has absolutely no time for a relationship and isn’t looking for one. But when his mother hires an unqualified baker, he has more to worry about than three-tiered wedding cakes. Like whether to break his own no-dating-employees rule and make a little room in his life for love.

‘How hard can baking be? Easy‐peasy. Right?’ She knew her words to be untrue. She’d watched shows on the Food Network. The chefs on television made creating desserts appear simple, yet Jessie’s attempts always ended with opening a window and the lid on the garbage can.
‘I have no choice, and at this point I have nothing to lose.’ Jessie had thought the same before her previous four jobs. Though, she did excel at one particular skill—making bad choices. If only she could include that talent as a positive trait.
She drew in a deep breath to calm her racing pulse. Desperation rolled in the emptiness of her stomach. She’d just go into the bakery and win them over. She had to. The two hundred dollars in her bank account would cover her car payment. As long as I don’t eat or drive anywhere, I’m good.

Darlene resides on the East Coast of Canada with her husband, daughter, and Yellow Lab. When not working on her next book, she enjoys spending time with her family. An avid reader since childhood, Darlene loves to develop the many stories swimming in her head. She writes heartwarming contemporary romances with a focus on plot-driven page-turners.

Who doesn't enjoy a sweet romance to curl up with on a cool fall evening?
Let us know you stopped by with a comment below.
Also be sure to share this post using the social media tags.