The Pirate’s Lady by Tricia Schneider

The spotlight is on~ 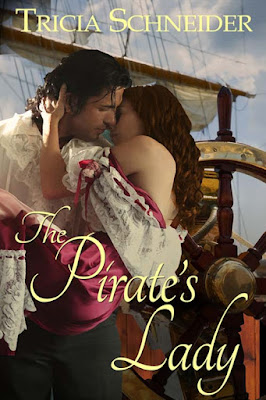 Captain Marco Dante was captured and sentenced to hang two years ago, but he escaped before his punishment was carried out. Now he's come back to the woman whose memory kept him alive those long months in prison. Arianne had been his grand passion, but he failed to see how much she meant to him until it was too late. Can he recapture her heart? Or has he lost her forever?

Arianne never imagined she’d see her notorious pirate lover again. Though her heart sings with joy at his return, she knows he hasn't come back for her but for the treasure he left behind. She agrees to help him find it, but can her heart withstand one more adventure with him?

“I have a life here now.”
“There’s nothing for you here. Your place is by my side. In your heart, you know ’tis true.”
She looked away, turning her gaze to the ocean’s waves pounding the beach with hypnotic rhythm. A few moments ago, she sat here, mulling over her life’s misfortunes and attempting to reach a decision about her future.
Her fate.
Arianne shook her head. “I no longer travel your path. You sail without me, my friend.”

She pushed her bare toes into the grainy sand and stood, brushing the remaining sand that clung to her petticoats. In the silence of the crashing waves, she turned and walked away.

Inside, her heart bled. Yet, she deserved no better. Her life led to this heartache. That she walked away from this man now, after all this time only confirmed it.

“Arianne, you’re coming with me.”

His serious tone warned her of his intentions. She spun to face him, unsheathing her sword in time to block his attack. The sound of metal striking metal pierced the moonlit darkness. Her ears rang with the sound.

They stood, neither moving. She stared into his eyes. “You would take me by force?”

“Never by force,” his voice lowered to a growl. “You will come willingly.” And he smiled, that knowing one she hated.

She let out a howl of outrage and swung her sword. He easily blocked. They stepped a deadly dance of striking blades, until again they were trapped by heated gazes.

Her breathing was heavy, labored, filled with excitement. She looked at his lips, wanting to taste them but knowing she dared not. Her will was never strong around him. With one touch she might lose herself and want him again for forever. But that dream would never be achievable with Marco.

With him, she’d always be alone.

“Come with me, Arianne.”

“No.”
She pushed away and again they danced. Her feet moved lightly as she sprang, her petticoats swirling with each movement though she hoped they would not entangle her legs. Her arm swung with lithe movements as she fought. She equaled him with skill and grace. Each time their swords clashed, the noise pierced her soul. That she fought him was a testament to her determination to escape his tyranny over her heart. She could not succumb to him again.
As they battled, a sheen of sweat appeared upon his brow. The exposed skin of his chest glistened in the moonlight. His arms flexed as he swung his sword. His grace, his power, his energy seduced her.
Her heart pounded. Her skin ached to touch his. The heat in her lower regions grew to a fiery inferno. She trembled.
Again, they locked blades.
They stood a moment, staring. His gaze burned into her soul. She licked the salty sweat from her upper lip, and his eyes followed the movement with utter fascination.
He pushed their swords away. With his free hand, he grabbed her shoulder, pulling her tight against his chest. Arianne tilted her head to look into his eyes. The blue depths called to her, like the ocean’s waves licking at her feet. The yearning to go to him was too great. She hadn’t the will to fight. 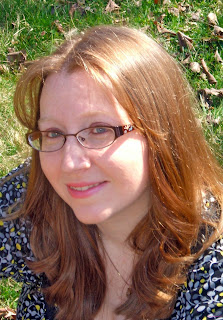 Tricia Schneider is an author of historical, paranormal and gothic romance. Before the supernatural took possession of her pen, she worked for several years as Assistant Manager and bookseller at Waldenbooks. After the store closed, she turned to writing fiction full-time. She has written both short stories and full-length novels published by The Wild Rose Press, including her newest book, The Pirate's Lady, and her historical paranormal romance series, The Merriweather Witches. Tricia is a member of Romance Writers of America. She lives in the Pennsylvania coal region with her musician husband, their 4 young children and 3 rescued cats. 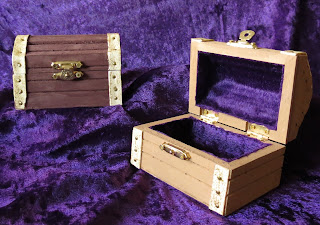 Enter for a Chance to Win a
$20.00 Amazon eGift Card
&
a Pirate Treasure Chest Trinket Box

I'd like to thank Tricia for letting me spotlight her new masterpiece. Leave any questions or comments below.