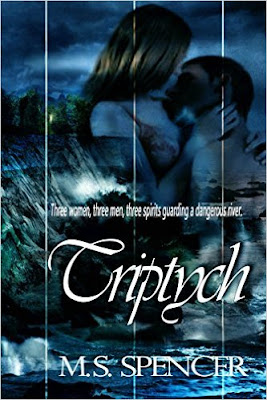 Today's spotlight is on
Triptych
by M. S. Spencer

Both Miranda Cabot and her sister Honor prefer their solitude to romance, Miranda having watched her husband die in flames on the Potomac River rocks called the Three Sisters. Not so the youngest, Sybil, who invites a mysterious Frenchman calling himself the Chevalier due bon Arnaque to stay with them in their mansion overlooking the Sisters.

Misgivings about the stranger’s intentions lead Miranda and Honor to ask their neighbors Dieter Heiliger and his grandson Corey to chaperone. Three beautiful, strong-willed women living in a house with three handsome, virile men results inevitably in an intricate web of jealousy, sex, and intrigue. Add in long-lost master artworks, stolen prototypes and a resident genius and you have a recipe for romance.

Who will end up with whom, and will the Three Sisters take another life as the legend calls for?
*****
This is a previously published work and the author, publisher and/or significant changes have been made from the original story.


Miranda waited for the footsteps to die away and for her heart to stop vibrating like a Chinese gong. She couldn’t believe her luck. In a stroke of providential stupidity, Pongo had tied her hands in front of her. Considering his scintillating conversation, I should have expected no less. She bent from the waist until she could reach the rubber band with her lips and pull it off, reflecting that those endless crunches were useful for more than energetic sex. She untied the rope around her ankles and rubbed the raw skin while she looked around. They were in a small room about four feet square. Mops and pails were hung on the wall, and sponges and bottles lined the shelves.
Luc hadn’t moved. Please let him not be dead. A glimmer of light filtered in from the hall and Miranda shunted toward him. She managed to untie the rope on his feet, but couldn’t tear the duct tape wrapped tightly around his wrists. Still he didn’t move.
She brushed her lips over his. He stirred at last and opened his eyes—and just as quickly shut them again. “Ooph.”
“Oh, Luc, you’re alive!” She kissed him again. “Are you okay? What hurts?”
He smiled, but kept his eyes closed. “Besides everything else? I have a splitting headache. Where are we?”
“In a closet. In Crandall’s house. Luc, I think he’s insane.”
He chuckled. “Yeah I got that feeling too. One doesn’t cross Mr. Adolphus T. Crandall the Fourth.”
“What do we do now?”
“Give me a minute, will you, mon désir? I am not at my best just now.”
Miranda bit off the tart reply, telling herself they weren’t going anywhere anyway. She sat as patiently as possible, listening to his labored breathing and for any outside sounds.
It seemed only a minute later that she woke. A sunbeam crept in over the threshold. I must have slept, but for how long?
“My watch says almost nine. We’ve been asleep about five hours.”
Miranda jumped. “Luc!”
“Shhh. Maybe they’ve forgotten about us.”
“No…” She lowered her voice. “I don’t think Crandall knows we’re here. The two thugs talked about letting us go when he went to bed. I wonder what happened.”
“Letting us go? Why?”
“I’m not sure, but they mentioned the ransom. Pongo said—”
“Pongo?”
“I’m not responsible for his name,” she retorted crossly. “Anyway, he said something about not getting the money if we were dead.”
“Hmm, I wonder. Considering the frenzied paroxysms of young Mr. Crandall last night, maybe there’s a rebellion brewing among the rank and file…”
Miranda put a warning hand on Luc’s arm. “Someone’s right outside.”
An unfamiliar voice spoke. “No, sir, I don’t think the storm caused it. I saw no evidence of a simple blown fuse. Someone tripped the alarm yesterday evening. Whoever did it was not a professional burglar.”
“What difference does that make?” came the high-pitched reply. Evidently Crandall had not yet slept. Or maybe he was always in a tizzy. “I don’t care how much it costs to fix—I want it repaired now.”
“Well, that’s just it, sir. The intruder made a real hash of the wiring. It’ll take me a couple of hours to untangle it and replace the fuses.”
Miranda glared at Luc. “Can’t you do anything right?” she hissed.
He grinned at her. “Let me get this straight—you wanted me to do a professional job dismantling the alarm so it could be easily reset?”
She stuck out her tongue.
“Oh, very mature. Now, shush.”
They heard the repairman say, “Okay, I’ll get right on it then.” The voices faded away.
“They’re gone. Hopefully the coast is clear. Can you get this duct tape off me?” Miranda plucked at the tight plastic clinging to Luc’s arms. It came off in long strands, but held firm. “Use your teeth.”
“All right.” She managed to tear a section of the tape and pull the rest off.
He rubbed his wrists and touched a palm to her face. “Thanks. Can you stand?”
“I think so.”
Holding each other tightly and trying not to knock anything over, they hoisted themselves to their feet. Luc turned the knob. Miranda thanked the makers of closet doors everywhere for not bothering with inside locks. He stuck his head out. “I don’t see anyone.”


The door to the outside stood open. Luc grabbed Miranda’s hand and tiptoed toward it. They saw sunlight glinting on a white van parked in a cobblestone courtyard. Birds twittered in the pines and a train whistle blew in the distance. Miranda felt like Dorothy as she ran out of the woods toward the City. That is, until something smashed into her skull. Before she blacked out, she heard a nasty, scratchy voice, saying, “Going somewhere, my pretty?” 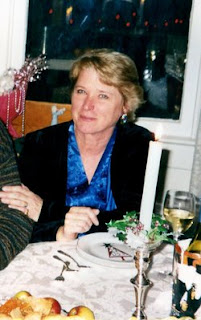 Although M. S. Spencer has lived in Chicago, Boston, New York, France, Morocco, Turkey, Egypt, and England, the last 30 years have been spent mostly in Washington, D.C. as a librarian, Congressional staff assistant, speechwriter, editor, birdwatcher, kayaker, policy wonk, non-profit director and "domestic engineer", aka parent. Once she escaped academia, she worked for the U.S. Senate, the U.S. Department of the Interior, in several library systems, both public and academic, and at the Torpedo Factory Art Center. She holds a BA from Vassar College, a Diploma in Arabic Studies from the American University in Cairo, and Masters in Anthropology and in Library Science from the University of Chicago. She divides her time between Maine and Florida. All of this tends to insinuate itself into her works.

You can find out more information about her and her work at the following places: