WHATEVER IT TAKES ~ JM Stewart

From one corner of the country to the other, welcome to my beach, JM. Sit back with your umbrella drink of choice and soak in the sunshine. If there’s one thing we writers have in common, it’s an imagination.

*sits back with a fruity drink and soaks up the rays* Ahhhh, warm sun. I’m in Seattle, where we’re now knee-deep in our fall/winter/spring season. It’s gray skies and rain until July. Thanks so much for letting me share your sun!

I love the imagination you used in putting together the story line for WHATEVER IT TAKES. Let me show our visitors what I mean ~ 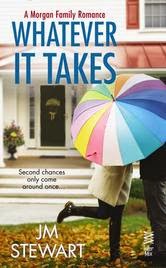 Blurb:
She’s been dying to hear the words…

Walking away from her husband was the hardest thing Becca Morgan has ever done, even if it was the only way to save her heart from being broken by a loveless marriage. Still, when a terrible accident forces her to stay at her ex Jackson’s house for a few days, emotions she thought she’d buried long ago start coming to the surface—and, to her surprise, seem to be reciprocated…

…he just doesn’t know how to say.

Jackson Kade has never known love like he knew with Becca, but his cold upbringing left him unable to show her how deeply he feels. When Becca winds up under his roof once more, he knows it’s his only opportunity to prove his devotion—and passion. But old habits die hard, and even one mistake could shatter their last chance at love…

That’s what I call romance at its best. Who doesn’t love a chance for two lovers to reunite?

Before Becca moves into Jackson’s house, how would she describe him?

She’d say he’s a good father, but he’s a workaholic who has his priorities all screwed up. She’d also say he’s spoiled, and he can’t take anything seriously, including her and their marriage.

What would Jackson say about Becca before their reunion?

He’d say she’s stubborn and hard-headed, tough as nails, one of the best cook he’s ever had…and the most beautiful woman he’s ever seen.

To give us a picture in our minds, what two celebrities would best play the parts of these two characters?

For Becca, that’s easy. Cameron Diaz. Jackson, that’s a bit harder. Lol I have a picture pinned to my Pinterest board, but darned if I know the guy’s name. lol So maybe Brad Pitt, the way he looked in Meet Joe Black.

When you get that first spark of inspiration for a new story, how does it begin; the characters, the opening scene, the goal you build up to?

This one changes for every book. Most of the time, though, it’s the characters and a couple of scenes. Usually the opening and the ending and a basic premise.

Give us a quick rundown of your writing process.

Once an idea has grabbed me, I usually spend a couple weeks pondering the characters and their story. Who are they? What’s the tale they want told and how can I best tell it? I usually have an idea of the opening premise. Occasionally, I need to hash out the plot with a critique partner. Then I figure out who the characters are. Their names, ages, where they live, etc. Then I sit down at my keyboard, open a new document and go at it. The plot usually changes as I go along, because my characters usually walk off with it. lol

How much of yourself or your personal life goes into your stories?

I think quite a bit more than I realize. Being an emotional/heartwarming writer, I draw from personal experience to help put me the emotion on the page. So, sometimes, depending on what’s happening to my characters, quite a bit of me ends up on the page.

How does your writing affect your immediate family?

lol! They usually complain about the lack of clean socks and underwear. ;) Otherwise, we’re all computer geeks over here, completely addicted to our technology, so nobody really complains too much.

What does your extended family think of you being a published author?

My biggest supporter was my grandmother, whom I lost the beginning of this year. Mostly, they were proud of me. Grandma bought my books when she could, even though they weren’t really up her alley (she read cozy mysteries).

What is the most ridiculous comment or question you’ve ever gotten about being a writer?

You know, I can’t really think of anything? I’ve gotten some reviews that left me scratching my head, but I can’t think of anything really ridiculous that’s ever been said to me personally.

I’m hoping to attract more first time writers to my blog this year. What pearl of wisdom would you share with them?

Remember why you’re doing this and be determined to never give up. Because I guarantee there will be days when you want to. There are days when the pressure gets to me and I wonder, “Why am I doing this to myself?” And remembering why I started is often what gets me through the hard days. When that fails, honestly, it’s a refusal to give up. When you get to that point, allow yourself to wallow if you need to. Hey, we’re all human. But get back up.

Also, it’s okay to be different. Just because your writing process, or even the way you choose to tell the story, isn’t like everyone else doesn’t make it wrong (and I guarantee you there will be people who tell you it is). Variety is the spice of life and each writer is unique. What a boring world reading would be if every book was the same! So, be uniquely you and be proud of it. Somewhere out there is a reader who needs the story you’ve written.

Just so we can all get to know you better ~ 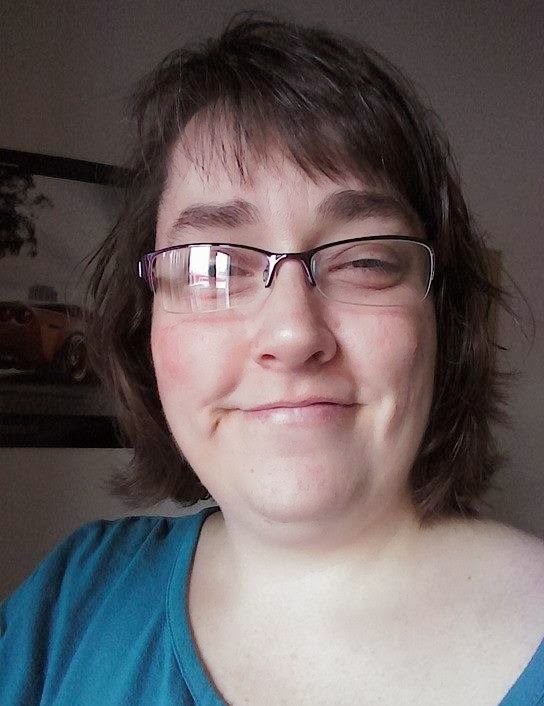 JM is the author of passionate, heartfelt contemporary romance. She's a wife, a mother, a spiritualist, and lover of puppies, and happily addicted to coffee and chocolate. She lives in the rainy Pacific Northwest with her husband, two sons, and two very spoiled dogs. She's a hopeless romantic who believes everybody should have their happily-ever-after and has been devouring romance novels for as long as she can remember. Writing them has become her obsession.

It’s been great having you as my guest, JM. Any time the weather gets messy in the northwest, you’re always welcome here in the southeast. If a hurricane comes along, well, we celebrate those too.

Thanks so much for having me! I may just take you up on that. I could use some more sun! lol

The question of the day for our visitors – Have you ever given an old love a second chance?