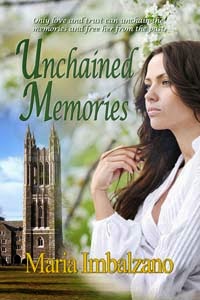 Welcome to the beach, Maria! I’ve heard how cold it is in New Jersey, so I’m glad I can share some of our sunshine with you. Take off your coat and grab an icy fruit drink.

It’s been snowing for months, it seems, and I’m not a fan of frigid weather. I can use a little relaxation on the beach, so thanks so much Sandy, for inviting me. This banana daiquiri is delicious.

If you’d like to have a beach party of your own I’d be glad to share my beach. The first people on your guest list should be the three people who’ve inspired you most, (dead or alive). Who would they be?

A  political science professor from Rutgers – Tom Hartman –  who inspired me to change my direction after college from pursuing a master’s degree in psychology to attending law school.
My husband, Chris, who supported my crazy dream to write a novel.
My mom, who always stressed that I could do anything I wanted to do.

If I were to meet your character, Clayton from UNCHAINED MEMORIES, at this party, what celebrity would he remind me of and why?

Clay is Patrick Dempsey from Grey’s Anatomy, or more specifically Dr. McDreamy.  It was the physical attributes more than anything else.  When I start my books, I flip through magazines to come up with an image of my characters.  I tear out those pages and put them in my book file. It’s to help me remember eye color, hair color, the shape of a jawline, especially when I’m well into the book and may not remember those early details. So Clay has dark, wavy hair, a little rumpled, usually a two-day beard and green eyes.  (I’m not even sure of the color of Patrick Dempsey’s eyes, but I know Clay’s eye color).  Clay is also taller than Patrick.

What are three things Clayton loves most about Charlotte, your heroine?

You work at a high-power job during the day and write at night. Tell us what advice you have for professional women who’d like to break into writing. Give us your biggest DO and biggest DON’T.

The biggest DO is to make time for what it is you want to do.  DON’T get sucked into TV shows, don’t sit down and relax after dinner, don’t procrastinate.  After working all day, it’s easy to fall into a pattern of relaxing, watching tv, reading . But that won’t get your book written. I usually come upstairs to my office at about 8pm and either work on my work in progress or do marketing tasks for my published novel.  Weekends are great  because I have much more time to dedicate to writing.  Of course, this doesn’t work all the time.  There are nighttime board meetings that I must attend or I have dinner out with my husband and friends. When my children were younger, their needs took precedence. But now I am able to dedicate more time to writing. Whatever time you have, whether it’s a half hour or several hours, you should use that time wisely. It will pay off in the end.

The natives seem to be getting restless. They want to hear about UNCHAINED MEMORIES.

As a rising medical malpractice attorney, Charlotte Taylor believes in standing up for the injured, giving them a voice, and advocating for their rights. She couldn't do it for her mother, so she does it for others, even if it means losing the love of her life.

Dr. Clayton Montgomery believes in working hard and playing even harder, until he reconnects with Charlotte. Barely noticing her crush when he tutored her ten years ago, Clay has a chance to make up for lost time when the beautiful lawyer comes back into town...until he discovers her chosen career path.

Now, philosophical differences soon become a reality and Charlotte is faced with the choice of representing a client against the hospital and against Clay. Will Charlotte give up her career and her tribute to her mother for a second chance with the man who got away?

A reunion romance in choppy waters! We’ll need a taste of what we can expect.

Red.  Hot.  Sexy.
Like magnets, Clay’s eyes clicked on Charlotte, unable to repel the force that held them.  Tall and graceful, her chestnut hair was held up in a loose, sexy do that had him itching to pull the pins that would release it.  Her strapless dress showcased a long neck and creamy shoulders that called out to be kissed.  His involuntary focus on her lovely traits throughout the evening had made him a rude dinner companion; unable to answer even the easiest of questions.
He had come here tonight to socialize with the powers that be at the hospital, to talk up the ER, to lay the ground work for future requests.  But his concentration had been directed elsewhere.  Since he’d squandered his opportunity to network, he should leave.  But here he was at the bar at ten-thirty, waiting for a scotch and soda.  The band was heavily into their Motown set and many of the revelers packed the dance floor.
Across the room, Clay zeroed in on Charlotte talking to a group of men, her red gown like a flame in a sea of black.  He smiled.  She sure knew how to turn heads.  His included.
But he knew her better than those clowns.  He knew the sweet, tough eighteen year old who’d lost her parents within hours of each other.  The broken girl whose emotional health had worried Dr. Collins, their Chief of Surgery, much more than her physical wounds.
As the band segued into a slow song, Clay covered the distance between them.  “Excuse us, gentlemen, but the lady promised me a dance, and I’d like to claim it now.”  He deposited his drink on an empty table and guided her toward the dance floor.
“I don’t recall promising you a dance.”  Her beautiful face held the hint of a smile.
“You don’t?  Then I must have dreamed it.”
He pulled her into his embrace, and moved with the music around the floor, feeling like one of the luckiest men there.    Although she hadn’t promised anything, she glided around the room, following his lead.  Her perfume intoxicated him more than any drink ever could, and the feel of her graceful body against his, had his heart palpitating.
Little Charley Taylor had certainly grown up, and he couldn’t help but wonder what it would be like to know her now.  As an adult.  Ten years removed from the time their lives had intersected.
He called on his memory, pulling up their very last encounter.
“I’m leaving for college today.”  She stood tentatively in his office doorway, her crystal blue eyes so expressive in their sadness.  “I wanted to thank you for all your help – especially with physics and calculus.  I never would have done so well without . . . you.”  She avoided his eyes as her voice trailed off, choked with tears.
His heart constricted, startling him.  He hadn’t anticipated the day she would no longer be around – trailing him at the hospital, asking incessant questions, teasing him for being so serious.  His life was on overload with his internship, not allowing him to realize the time he dedicated to her was not just tolerated, but treasured.
He walked around the desk intending to give her a friendly hug, but when he took her in his arms something changed. Her familiar flowery scent awakened his senses as if he’d been in a deep sleep and he closed his eyes to heighten the aroma. Her body fit against his like a shadow.  He fought the confusing stimuli - this was Charley, his former patient and pupil.   But that wasn’t who he held close, who he breathed in.  When had she become more than that?
Charley hugged him hard, laughing through tears.  “I hate good-byes.”  She turned to make her escape, then added, “Dr. Collins has my information at school.  Call me sometime.  Let me know what you’re up to.”
Clipped, hasty words said with a matter-of-factness meant to cover up the emotions she clearly felt. The same emotions that had just blind-sided him.
Then she turned and walked away, her new life ahead of her.
Clay’s lips touched her forehead as they circled the dance floor.  He closed his eyes taking in the smooth feel of her skin.  Before he could stop himself he asked, “How’d you like to go out to dinner one night next week?”
She pulled back to look at him.  As if to gauge his sincerity – or perhaps his motives.
“I . . . I don’t know.  Maybe.”
Disappointment moved through him.  Why was she being hesitant, cool?  It wasn’t as if she didn’t know him.  Christ, he’d spent countless hours tutoring her.  Even more time talking to her, being her friend, so she wouldn’t feel so alone.
Could a decade erase all that and make them near strangers?  He didn’t think so.  The second he’d realized it was her tonight, the years had melted away.  They’d fallen into easy conversation.  Since she was back again, why couldn’t two old friends reconnect?
In no time, the song ended and Charlotte slipped out of his arms.  “Thanks for the dance.  I better get back to my table and say my good-byes.”
He held onto her hand.  “Don’t go.”  He didn’t know what else to say.  It sounded so pathetic. But he didn’t want the night to end.  Confusion pulled at his brain.  Why did he want her to stay?  Why was she so anxious to get away from him?  They’d had a nice talk earlier.   All he’d done now was ask her out to dinner.  But if she wasn’t interested . . .

It sounds like a great read in any season. Our guests can find it by going to Amazon
http://amzn.com/B00FDZ6HWM

Our guests are enthralled. Everyone wants to get to know you better.

I’m a matrimonial lawyer in central New Jersey where I not only use my law degree to navigate clients through the court system, but my psychology degree to guide them through their personal struggles. While writing motions, legal memoranda, and briefs is fascinating, it pales in comparison to creating memorable characters and taking them on their emotional journeys.

In addition to practicing law and writing fiction, I enjoy spending time with my husband and two daughters either at home or at the Jersey Shore. 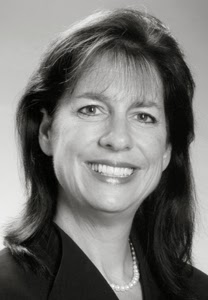 You’ve been a terrific guest, Maria, and UNCHAINED MEMORIES sounds fantastic. I hope you’ll come back for more parties in the future.

It’s always fun to chat with new friends and I love talking about my characters.  In New Jersey, the snow is still covering the ground, so anytime I can get away, especially to a beach, I’m ecstatic.  Thank you, Sandy for inviting me to your beach party. I will definitely come back in the future.

Before everyone runs off, feel free to ask Maria questions or give a comment below. Thanks for coming to the party!
Posted by Sandra Dailey at 2/22/2014 12:01:00 PM