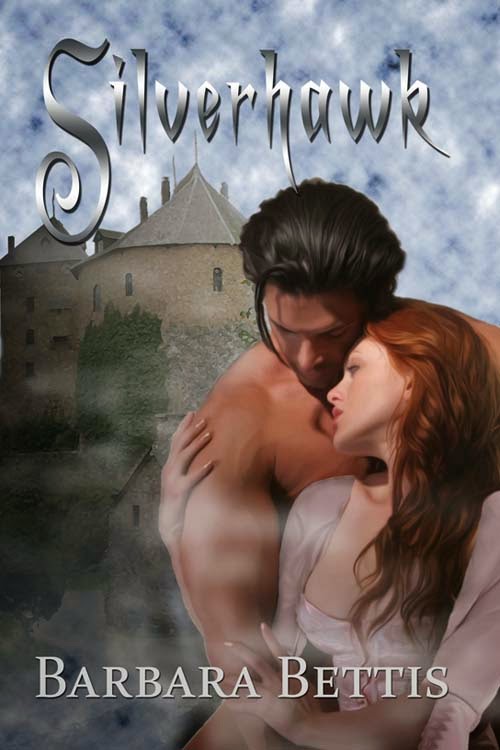 Barbara Bettis is on the beach today to talk about what a knight wears. I had no idea there were so many options. It's fascinating and so is her knight, Sir Giles, from SILVERHAWK. I'll let Barbara take over from here.

Hi Sandra. I love your blog here. Thanks so much for having me visit.

Don’t you love a knight in shining armor?  Giles of Cambrai fits the bill, sort of. Knights in his day, late12th Century, wore chain mail, not the plate armor of a couple centuries later. So Giles’ armor wouldn’t shine all over, perhaps. But Giles shines from the heart J
In the beginning of Silverhawk, when Emelin and her escort come upon the battle on the road, they have a hard time deciding whether Giles is a knight or one of the outlaws. He isn’t garbed in chain mail, and the light armor he did wear looked quite old-fashioned—not at all what a man of affluence would consider proper.
Researching armor in use at that time proved interesting—and a little frustrating. Oh, certainly there were books and online sites that contained detailed information about chain mail, but a good deal of ambiguity seemed to exist. Did every knight wear the same kind? In exactly what years did the styles change? Wasn’t it possible that some less affluent fighters wore older varieties?

Chain mail was made of individual links of metal and very expensive. Some mercenaries like Giles were outfitted as well as any well-to-do knight. Others couldn’t afford the Armani of armor. J They had to settle for less.
Giles was well-known, a member of Mercadier’s troop. ( Mercadier was an actual mercenary who served as King Richard’s right hand man for years until the king died. In fact, it was Mercadier’s personal physician who treated Richard for the arrow wound that eventually killed him. But I digress.)
Back to deciding what armor Giles should wear. Of course he could afford the best! But he was going on a secret mission for the king, one that required him to travel ‘light’ as it were—inconspicuously and quickly. In reality, would a well-known soldier wear full battle gear if he wanted to travel incommunicado? Probably not. And a suit of chain mail was very heavy, not just to wear but to transport.
I thought Giles certainly wouldn’t want to drag around a pack horse loaded with mail. Not only would he draw the attention of travelers, he’d draw the attention of outlaws, who would see a lone man with a pack animal which must undoubtedly carry something of value. Perfect target.

Yet he’d need some protection. So I went back to the research books and found descriptions of what we would call vests or sleeveless jackets, often made of boiled leather and on which metal links had been affixed.
This kind of light and less-expensive armor had been worn, the books implied, by men at arms or other less affluent fighters. The vests were old-fashioned and rather out of date for the late 1100s. They seemed something that a ‘country’ knight might wear, one who was not wealthy, who was, in other words, no threat.
That seemed a reasonable choice, keeping with Giles’ disguise.
Over chain mail, knights wore surcoats, long sleeved, calf-length garments slit up the front and back, often emblazoned with their coat of arms or with other “devices” or insignias identifying them. Dead giveaway for Giles (no pun intended). He chose an ordinary tunic—although he slipped up and wore a blue one. Blue was not a color worn by the common people at that time.
What? Peasants weren’t allowed to wear certain colors or fabrics? No. They weren’t. But that’s another story. J

Speaking of another story—My second medieval The Heat of the Phoenix, which is all about Evie and her knight, is in edits right now. I’m hopeful it will be out this year.

Silverhawk
He’s everything a proper lady should never want; she’s everything a bastard mercenary can never have.
Sir Giles has come to England to kill his father, who seduced and betrayed his mother. First, however, he’ll seek sweet revenge—kidnap the old lord’s new betrothed. But when Giles uncovers a plot against King Richard, he faces a dilemma: take the lady or track the traitors. What’s a good mercenary to do? Both, of course.
Lady Emelin has had enough. Abandoned in a convent by her brother, she finally has a chance for home and family. Yet now she’s been abducted. Her kidnapper may be the image of her dream knight, but she won’t allow him to spoil this betrothal. Her only solution: escape
Rescuing the intrepid lady—while hunting traitors—is a challenge Giles couldn’t anticipate.  But the greatest challenge to Giles and Emelin is the fire blazing between them. For he’s everything a proper lady should never want, and she’s everything a bastard mercenary can never have.


Thank you for being our guest today, Barbara. I can't tell you how much fun it's been...or how glad I am to wear 21st century clothes. Be sure to stand-by, because I'm sure there'll be a few questions and comments from our visitors.
Posted by Sandra Dailey at 1/18/2014 11:52:00 AM