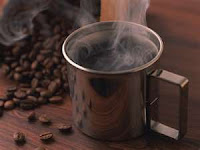 Welcome to Coffee Talk, Preston. Congratulations on publishing your first book, Vermillion Skies.
Thanks for havin’ me, Sandra. G’morning, guys! 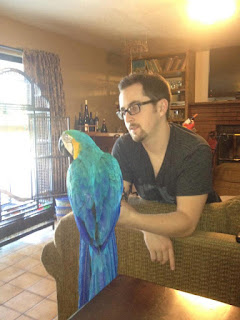 Tell us a little about yourself away from the keyboard.
I was born and raised in Bakersfield, CA, and I received my Bachelor’s degree in physics from UC Santa Barbara. Nowadays I spend my time substitute teaching at high schools and tutoring math and physics. Between road trips and helping support my family, I write to put my mind at ease. And of course, every now and again I lose myself in a gory, cheesy horror movie complete with clearly fake props and terrible acting. No wife, no kids, and that’s how I plan on keeping it…at least for a few more years ;)

What inspired you to become a writer?
I’ve always wanted to create—in the second grade, I made a comic strip titled “Chihuahua Man.” It wasn’t until my best friend introduced me to a band called Coheed & Cambria (whose albums are based on their comics, The Amory Wars) that I got the idea to write as an actual hobby. Writing offered a productive outlet for my creativity.

What was your inspiration for Vermillion Skies?
This is a tough question. A lot of things inspired Vermillion Skies, and a lot more inspired the many elements found within. But originally, my friend told me about a dream he had had where he was trapped in a dark temple with someone. We spent hours that night over Skype developing a massive, intricate plot just based off of a few events and even fewer characters. Over the next three years, the story developed and grew into a fully fledged, gripping novel.

Do you plan on a sequel, series, or anything else?
The Old Kingdom Ardänia is a four-part series, and Vermillion Skies is the first book. I have ideas for several spinoffs at the end of the series, but nothing solid yet. The second book, Shattered Memories, may come out sometime next fall.

What reading audience are you targeting with Vermillion Skies?
Anyone who enjoys an epic journey will love it. There are some themes that are NOT for children—it’s geared more toward the older end of young adults and up. I’ve always thought that the more popular fantasy series lacked a certain adult element, hence this series has some more mature themes throughout.

I saw on a post that your father painted the cover art for your book. What other involvement has your family or friends had in your writing experience?
A few of my friends offered to help edit my manuscript. Their feedback and encouragement was invaluable. Without them, Ardänia wouldn’t be nearly as beautiful and diverse as it has become. In post-production, my family and friends have been vital parts of my advertising campaign. 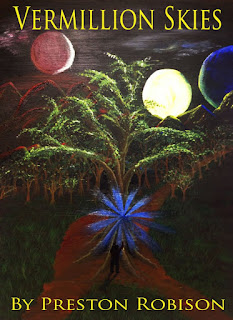 Besides the beautiful cover, your blurb should grab a lot of attention. I happen to have it here for our guests to read.
Magic had been lost to the annals of fairytales since the Old Kingdom had collapsed centuries before. By mere willpower, Ardänia continued to survive throughout time, all the while an ancient evil grew powerful in the east. In the depths of the Fauxverite Woods, a young Ardänian named Meyral discovers a staff that may change the fate of his kingdom forever—if he can survive the night.
The Nordcross empire’s troops are fast approaching, and Meyral’s only hope is to reach the Northern Federation to find Taryn, someone who his father believes will be able to teach Meyral to use the Staff of Ardänia. Along the way he recruits his old friends, the cold and logical Maxine and her large, obnoxious brother, Alberto. As they travel north, Meyral struggles with the secrets surrounding the staff, an artifact whose immense power is as dangerous as it is mysterious.
Together the trio will find trials more difficult than they ever imagined—war, death, and even love—and eventually come face to face with Sera, a sinister woman behind the armies of Nordcross with an agenda of her own. With no more than their own manpower and a little luck, the three heroes fight for their kingdom, their people, and their lives.

If anyone would like to purchase a copy of Vermillion Skies, it’s available now on Amazon and CreateSpace.
As an ebook: http://www.amazon.com/dp/B00AVT48OE
As a paperback: http://www.createspace.com/4119210