BURNING LOVE by Jana Richards is on sale for .99 between June 14th and 28th
get it at this great price while you can! 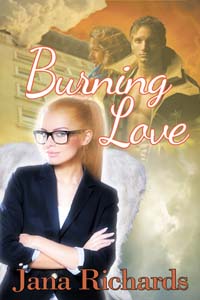 After causing three cooking fires in her apartment, Iris Jensen finds herself evicted and homeless. She lands on Riley Benson's doorstep, looking to rent a room in the beautiful old home he's restoring. It's only for six weeks until Iris leaves Portland, Oregon for her new job on a cruise ship. Firefighter Riley knows firsthand what a bad tenant she can be. But he needs money to finish the work on the house he loves. And something about Iris pulls at his heart…
Meanwhile, in Heaven, two angels watch over the young lovers. Angelica and Hildegard work in Heaven's Relationship Division, where angels match mortals with their soul mates. The angels believe so strongly in Iris and Riley’s love that they break Heaven's rules to help them. Can the angels convince them their love will last a lifetime?


Riley looked into her beautiful blue eyes and her smiling face and did the only thing he was capable of doing at the moment.
He kissed her.
Maybe later, he told himself, when sanity returned, he’d think of a hundred reasons why pulling Iris into his arms, holding her snug against his body, and plundering her soft, sweet mouth was not a good idea. But for now, right now, as she wound her arms around his neck and made tiny sounds of excitement deep in her throat, it felt exactly right.
Heaven. Having Iris in his corner made him believe everything was possible.
He stepped backward toward the stairs, pulling Iris with him, intent on taking her upstairs to his room. He suddenly tripped, nearly losing his balance. He glanced behind him and saw the object he’d stumbled over. A set of luggage sat next to the stairs, still bearing tags from the retailer.
“What the hell is this?”
Iris kissed his neck. “I’m sorry. I should have taken them up to my room.”
Iris had bought new luggage for her trip. Her plans hadn’t changed.
She’s leaving me.
The thought acted as effectively as a bucket of cold water tossed over his head. What was he doing? She was leaving in three weeks and didn’t plan to return. The calendar in the kitchen reminded him of that every day. Why start something that would only lead to heartache?
He’d already lost too many people in his life.
And Riley instinctively knew that if he let himself get close to Iris, let himself love her, a part of him would not survive when she left.