Every district has its ‘last wolf’.” Sobieski Stuart.

Come on now, let’s face it few animals have captured people’s imagination like the wolf. For thousands of years, wolves have frightened.  Think were ones. Think fairy-tales …Red Riding Hood, the Three Little Pigs. No-one was afraid of the Big Bad…fox, were they? And What was the name of that game we played as kids…What’s the time Mr Wolf?  Oh and then there was the boy who cried one? Why because they are predators.

But wolves fascinate in equal measure, perhaps because there’s a part of us that identifies with their wild, untamed spirit. Wolves are definitely sexy, smexy. So when it came to creating my new hero, I wanted to buy into the myth, especially as he’s a Highlander and Highlanders like having fancy names. Also this is a guy who needed to have created a bit of mythology to survive. Is he a man? Is he a monster? Did he really sell his soul to the devil to exact revenge on his enemies? Or is he to paraphrase the Hound of the Baskerville’s quote….(not a wolf but close) really made of flesh and blood? So cue the hottie-Scottie, the Black Wolf of Lochalpin, a fictional place based on the real Glencoe in , where once the wolves roamed. 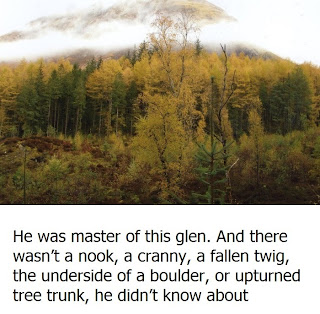 Quite a stunning place by the way and the setting of my new book, His Judas Bride, newly released by Etopia Press. I think you can tell location is every bit as important to me as wolves… 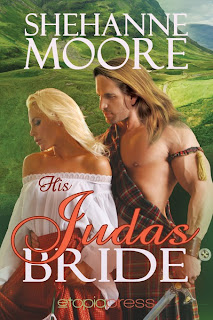 By far the most stunning thing here was this damnable specimen. Of course, if she’d now to lay odds on his arm muscle tightening as he tugged on his own reins, on that smile, denting his faintly stubbled cheeks, she’d be rich.
“That’s the first I knew you spent a night in my company. Did I fall asleep and miss something here, Princess?”
She tightened her shoulders. Miss something indeed? Knew it, didn’t he—what a stunning specimen he was. Why else turn a simple request for information into a sexual quest? Well, she would not rise to this shabby bait.
Although she expected a little better from him. Was this honestly the best he could come up? A tit-for-tat retaliation? Slow off the mark at that. Take him down a peg or two though? This would be a pleasure through and through.
She edged her gaze sideways, letting what she hoped was a smile play. “Of course, I can only speak for myself. If I had, and it’s an if you understand, you’d not have fallen asleep.”
“That would be beyond your miniscule capabilities.”
“You like to think?”
“I don’t just think. I know.”
Just how the blazes did Meg put up with it though? This very deliberate casting of nets on the waters of female sexuality? So even Kara felt horribly threatened? And his unutterable damned cheek that accompanied it?
In a few words?
Because he scorched sheets.
“You know, Princess, not that I’ve any use for them, but that wasn’t a very virginal thing to say.”
Now look what she’d gone and done. Made him nudge closer, so their knees almost touched. When she didn’t want them to touch. If she dug her spurs in though he’d probably be after her faster than that damned dog had her belt this morning. Ice. Stone.
All right, she could tell herself blazing sexuality seldom fished for nothing. Here she was, betrothed to his brother—supposedly anyway—and he still couldn’t stop himself, flashing that confident smile at her. He probably flashed it around half the women in the glen. And they fell at his feet. Well, she wasn’t going to fall at his feet, if that was what this was about. If it wasn’t something more. Some attempt on his part to spy her out.
“Oh?” She tilted her chin. “You speak virginese do you?”
“Virgin—what?”
Although how would she sort it, when that flickering grin said she had just made it worse?
“I’m keeping my lips sealed, Princess. Least said, soonest mended.”
“That will be a first. But very welcome if you honestly believe there’s one rule for what I can say and another for what I can listen to. You know perfectly well, you didn’t spend anything with me. So don’t pretend you did. That is not the kind of lies I want reaching the ears of my beloved.”
Out the corner of her eye she saw his gaze sweep her. He narrowed his eyes. Was that because she could have fooled him? “I’d keep the endearments till you meet him. See what fancy words you come up with to call him then.”

HIS JUDAS BRIDE BLURB:
To love…….
To save her son, there is nothing she won’t do. To save his people, neither will he. Dire circumstances force Kara McGurkie to forget she’s a woman. Dire circumstances force her to swear to love and honor, to help destroy a clan in order to get back the life she lost.  But when dire circumstances force her to seduce her fiancé’s brother on the eve of the wedding, will the dark secrets she holds and the things she wants most, be enough to save her and them, from his powerful allure, especially when she knows he may just be playing with her.
Honor….
Callm McDunnagh, the Black Wolf of Lochalpin, ruthlessly guards heart and glen from dangerous intruders. But from the moment he first sees Kara he knows he must possess her, even though he also knows that surrendering to his desire may prove the most dangerous risk of all.
And betray…;
Now no problem becomes big problem as passion and desire rage out of control. Kara must look into the soul she thought she sold to make a choice. But can she look deep enough? Only she can decide who and what passion can save, or destroy, how when and who will finally learn the truth of the words… Till death do us part.