Welcome to Coffee Talk, Andrea. We’re so glad to have you here and this is the perfect time for our visitors to hear about your newest release LAWLESS LOVE. I know they’ll want to read it and it’s free this week from Amazon for a limited time.

Thanks so much for having me here, Sandy, at the launch of Lawless Love’s free days from 9-13 July.
(buy link below) 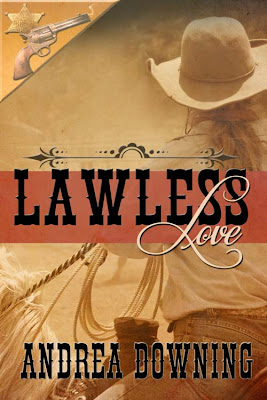 Let’s start right off with the blurb:

Lacey Everhart has carved out a tough existence in the wilds of 1880's Wyoming, working hard to build a secure life for herself and her younger brother, Luke. She will stop at nothing to protect what's hers and keep them safe. Even if it means keeping a secret that could their lives.
Marshal Dylan J. Kane is a man who considers everything as back and white, right or wrong. He's never seen life any other way until he sets eyes on Lacey. Suddenly the straight and narrow that he's followed has a few twists and turns. Loving Lacey offers the home life for which he hankers...but can he really love a woman who seems to be plain lawless?

I can’t resist a good historical western romance. I’ve heard through the grapevine that you’re a city girl with a western background. Can you tell our visitors a little more about that?

I was born in New York but moved to Britain and lived there for many years before returning to live in NYC in 2008.  I wouldn’t say I had a western “background” but we always took our family vacations on ranches out west.  My daughter and I have clocked up some 17 or 18 ranches to date.  Nowadays I do own a vacation rental in Jackson, Wyoming and try to escape there at least twice a year.

What made you decide to write about the west rather than drawing from other experiences?

You know it wasn’t actually a conscious decision like, “oh I think I’ll write a story with a western setting.”  It just sort of happened because the idea for Loveland came to me when I returned to live in the USA and happened to discover that many of the large cattle companies of the 1800s out west were actually owned by British aristocrats.  Of course, you might ask:  do these western stories come to me because I love the west and have studied its history?  In a way, I am drawing from my own experiences—experiences seeing that landscape, being on a working cattle ranch, knowing that history.

Do you ever think about crossing into another genre? If so, what genre would it be?

I have a contemporary women’s fiction ms. (but with a romance element) on an editor’s desk at the moment—but it is still at least partially set out west!  I also have notes and a few pages written for what is generally called ‘literary fiction,’ but I have to say I feel that sounds rather pretentious.  Apologies!

I know we’re all glad that you do write historical western. I feel that it’s the most colorful time in American history. It makes for great romance as well. Here’s an excerpt to prove it:

Lacey thought of fluttering her eyelashes, but it was such a silly thing to do. How could women act like that? She just looked up at the marshal and waited, the possibilities turning over in her mind, flitting through her head but never settling.

“You wanna tell me what really happened now so we can try to sort this matter? All I can do is promise
I’ll do everything in my power to sort it for you, but I cain’t help you less’n you tell the truth. You tell me lies and make me look a dang fool, there’s nothin’ I can do. You understand that?”

Along with the tiniest nod, she clasped her hands together. She looked up at Dylan Kane and saw kindness in that face, a face she could so easily have loved had things been different. She could sense the heat radiating from his body and knew if she touched his chest, a strength would exist where his heart beat. If she ran her hand down his arms, she would find that same strength in his muscle. How she wanted those arms around her! All her life, it seemed, she had looked after herself, cared for her brother, struggled to make a home for the two of them. What would it have been like if Morgan had not…

“Lacey?” Dylan’s soft voice brought her back from her reveries. “You ready to tell the truth?” With one gentle finger, he lifted her chin so their gazes met for a moment before they each stepped back from the brink of something neither could control. “Lacey?” he repeated.

It sounds like a must read to me! How can we get LAWLESS LOVE?

It’s currently only available at Amazon at http://www.amazon.com/Lawless-Love-Lawmen-Outlaws-ebook/dp/B00D0TB0DO/ref=sr_sp-atf_image_1_2?s=books&ie=UTF8&qid=1371505331&sr=1-2&keywords=Lawless+Love

As I mentioned, it is free from July 9-13, and on September 4th it will be on general release and available from the publisher at http://thewildrosepress.com/  and Barnes and Noble and other sites for digital books.

I should remind our visitors that they can also find your last release LOVELAND, because one just won’t be enough.

Do you prefer to read stories that are similar to what you write? If not, what do you like to read most?

I read a great many different genres but, yes,I do read a lot of westerns and western historical romance.  I also enjoy women’s fiction and so-called literary fiction as well as biography and history.

What writer or writers have been the biggest influences on you?

Who in your ‘real’ life has influenced you most as a writer?

I’d have to say my daughter!  She really believes anything is possible and encouraged me to get my work published—that was a huge influence on getting it done and persisting with it.

What kind of feedback have you had from your family and friends?

They’ve all been extraordinarily supportive and encouraging even though, for instance, my New York family has no idea how this has all come about—my writing about cowboys and ranches in the 1880s!!!!

How has writing changed the way you view the world?

I spend more time taking in the differences between people, their mannerisms and quirks.  When I travel I like to sit there in the lounges and study people much more than previously in the hope of getting ideas for characterization.  I’m far more conscious of ordinary people and their peculiarities that make them not quite so ordinary as they seem.

We’d love for you to share with us what you’re working on now.

Well, as I said earlier, I have some notes and a small amount of writing that is aiming to be in a book which, I believe, would be classified as literary fiction. It really concerns a young woman who is searching to make more meaning of her life—and that is all I’m going to say.  I’m also about to start a novella for The Wild Rose Press’ Love Letters series—and, yes, it’ll be another historical western romance.